22.1.20
In the second project week, our class went to Edinburgh for three days.
Most of us arrived in Edinburgh on Sunday afternoon. When we arrived, it was already dark, and the Victorian town of Edinburgh was very spooky. But the high, dark houses and spooky lanes also had their own charm.

Monday
Our first official activity was to drink a coffee or a tea, which we all know as a very common British activity. Then we headed out for a Sherlock Holmes tour. An original Scottish man guided us through the old town and told us interesting facts about Edinburgh’s history, current events and obviously showed us a few places with connections to Sherlock Holmes. 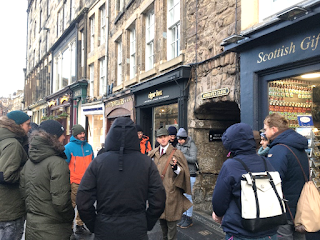 In the afternoon, we were invited to the University of Edinburgh for some geomatics presentations. One thing that really surprised us was the huge differences in cadastral surveying. In Switzerland, you need to have a building permit to being allowed to build anything, and when the construction is completed, the cadastral survey takes place. It works differently in Great Britain. There you can just build (maybe there are restrictions, he didn’t say), and then every third year, a remote sensing takes place to measure all the differences and to update the cadastral survey.
After these interesting presentations, we went for a beer with some of the speakers and the students in Edinburgh. That was a great chance to talk to some native English speakers and to become more used to talking in English ourselves.

Tuesday
On Tuesday morning, we visited the office of ESRI UK. ESRI is an international company, which develops geoinformation systems and GIS solutions all over the world. We were told what it is like to work there, which departments they have and what exactly they do. The presenters also told us about their personal backgrounds, what they enjoy and what their challenges are. It was very exciting to get an insight into the GIS working environment.

In the afternoon, we visited the National Library of Scotland, which has one of the largest map collections in the world. We were shown their web application, with which you can search for places and display all the available maps. It was interesting to see that even old maps can be displayed in 3D. The contour lines were interpreted and modelled in 3D.

Wednesday & Back Home
The last day in Edinburgh was really sunny but still very cold. We went to the Edinburgh Gin distillery and had a guided tour. The whole process of making gin is very interesting, and we were also informed about the history of gin and its ingredients. We also tried the gin that is produced there. In the afternoon, we went home to Switzerland. 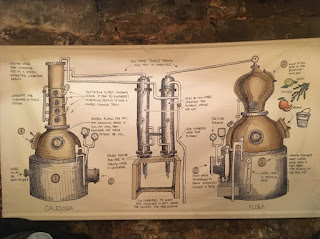 The trip to Edinburgh was a nice and interesting experience. Although it was January and the weather were sometimes rainy and windy, we had fun, and we learned many new things. We could test our English skills on native speakers and learn from the scientific talks at Edinburgh University and ESRI UK. 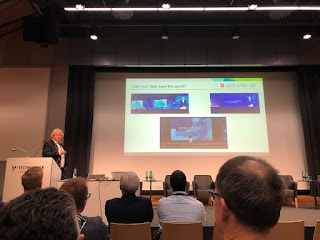 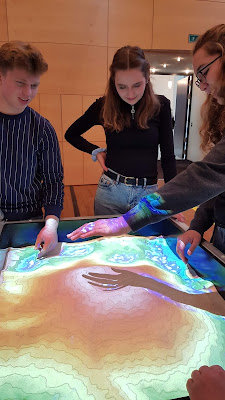 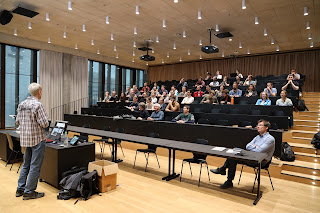